Home > About the Library > History

Tsinghua Xue Tang was founded in 1911.

The stand-alone library building (now the east section of the Old Library) was completed in March 1919. It was designed by the American architect, Henry Murphy. Upon moving into the new building, it was named Tsinghua College Library. It was one of the first four main buildings of the university. 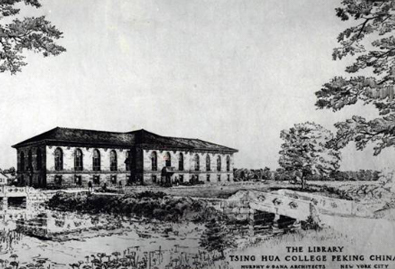 Tsinghua College became the National Tsinghua University in 1928. The rapid increase of its acquisitions budget and library collections year by year outgrew the capacity of the building, which led to the expansion of the library. The addition of the central and western sections of the present Old Library began in March 1930. It was designed by the famous architect Yang Tingbao and completed in November 1931. After the establishment of the University, a Library Standing Committee was formed. Around the same time, most of the schools and departments within the university established their own subject libraries.

From October 1935 to September 1936, the famous litterateur, Prof. ZHU Ziqing was the Chairman of the Library Committee and Library Director. By the beginning of the Anti-Japanese War, the library collection had reached more than 360,000 volumes.

During the Anti-Japanese War period, Tsinghua University was forced to move to the South.

In April 1938, after moving to Kunming, Tsinghua University, Peking University, and Nankai University formed the National Southwest Associated University. Tsinghua Library shipped more than 23,000 volumes to the new university. While in transit, the collection was hit by bombing raids by the Japanese Army. Of the 10,000 volumes that were stored in Chongqing temporarily, only 3,000 survived.

In 1946, after the victory of the Anti-Japanese War, Tsinghua University returned to its original campus in Beijing, but the library was no longer what it used to be. During the war, the library was used as a hospital by the Japanese army. The library collection suffered a heavy loss of 175,000 volumes. On the eve of the Liberation, there were only 410,000 volumes left.

After Tsinghua University’s liberation on December 15, 1948, the library embarked on a strong development program again.

Under the nationwide higher education restructuring plan in 1952, Tsinghua University was changed from a comprehensive university to a polytechnic university. All humanities, science, and some engineering and technical colleges and departments were transferred to other universities. The corresponding library collections were also transferred at the same time. By 1958, the library had transferred 180,000 volumes to other libraries. Fortunately, 300,000 rare ancient books, oracle bone inscriptions, bronzes, and other precious cultural relics were preserved under the instruction of the then-president, Jiang Nanxiang. To support the education and research needs of the restructured university, the library acquisition policy focused on engineering materials as well as Marxism-Leninism works and modern literature. The collection had grown to 1.35 million volumes by 1966.

During the Cultural Revolution, the budget of the library suffered deep cuts. The library stopped buying or subscribing to many important books and periodicals. Fortunately, with the help of faculty, students, and librarians, most of the existing collections survived. After the Third Plenary Session of the 11th Central Committee of the CPC in 1978, the education sector began to develop rapidly. From the late 1970s, Tsinghua University began to adjust its disciplines, gradually restoring sciences, humanities, and other departments, and re-expanding to become a comprehensive university. With the university’s continuous expansion of its scope, the variety and quantity of the library collections had also increased to 2.5 million volumes (items) by 1990. 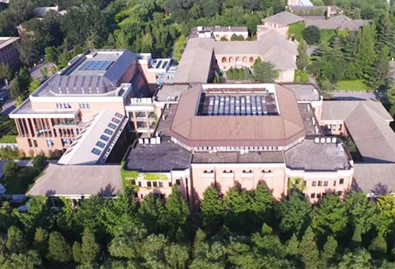 An aerial view of the Main Library

In September 1991, the West Library (Yifu Library), designed by an academician of Tsinghua University, Guan Zhaoye, was built. Theconstruction was supported with a donation by Sir Run Run Shaw and an appropriation by the Ministry of Education. The West Library followed the same architectural style and was integrated harmoniously into the Old Library.

During the Centennial Anniversary of Tsinghua University in 2011, the new Humanities & Social Sciences Library, located in the core teaching district of Tsinghua University, was completed. It was collaboratively designed by the famous Swiss architect, Mario Botta, and the China Academy of Architectural Sciences. It has become an important place for hosting academic and cultural resources and exchanges for the university.

With the establishment of Tsinghua University People's Bank of China School of Finance, the Finance Library was incorporated into the university library system and became the sixth subject library in 2012.

The North Library (Mochtar Riady Library) was completed in 2016. It was designed by Mr. Guan Zhaoye, an academician of the Chinese Academy of Engineering, a famous architectural designer and professor of Tsinghua University.

The new Law Library in Leo KoGuan Building opened for a trial run on May 29, 2019. It is the largest and best equipped law library among Chinese universities.